TSRR was invited to bid on and ultimately won the restoration of a badly eroded bank along the Capoolong Creek, a wild trout stream in Hunterdon County, NJ by the Division of Fish & Wildlife who own this property.  The old railroad bed perched above the creek is a popular hiking trail onto state lands for hunters, anglers, hikers, dog walkers, and horseback riders, and the trail was being eroded away with no place to relocate it as it abuts a private property and not other state lands. 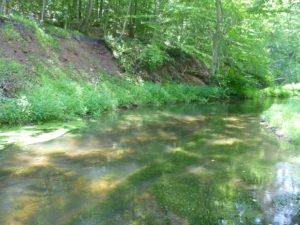 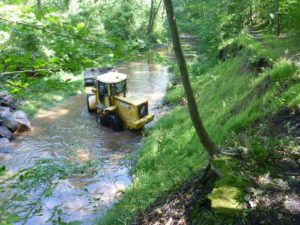 The project consisted of arresting future erosion by refocusing the river’s energy away from the bank in high water, restore some of the lost material to the bank, plant it with native trees, shrubs and seed mix, and allow the state to do additional work to restore the trail itself now that it will no longer erode into the stream below.  The slope of the eroded bank was covered in invasive Japanese stiltgrass which dies off in winter and does not have a root system to hold soils in place.

The river’s energy was redirected off the right bank (looking downstream) and large boulder barbs were buried under what appears as a normal bank that will push the high flows off the right bank and into the deep pool, scouring the pool and lessening energy that could damage the bank further.  During the permitting process, a state threatened salamander species was found to be on site, and TSRR worked with Division biologists to not only keep them out of harm’s way during the construction phase of the restoration, but we also incorporated some of their habitat needs into our final design. 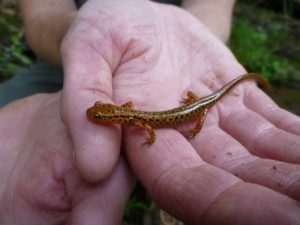 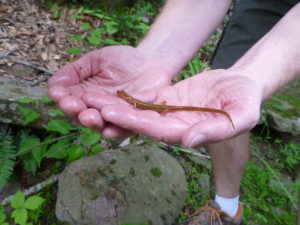 Wild brown trout began moving into the newly restored pool as heavy equipment was leaving the site, and we watched as one of the trout rise consistently upstream in a pool above our work, seemingly oblivious to having an excavator working 50 yards downstream.

BELOW: keying in a boulder weir 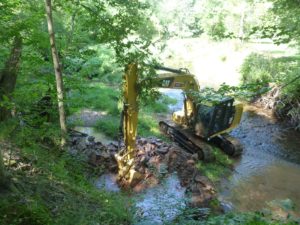 BELOW: a tough planting location! 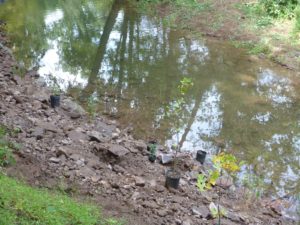 Below: the finished product minus seed sprouting…. 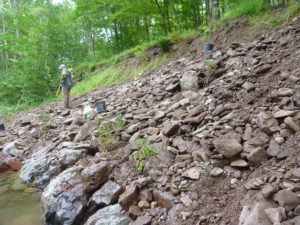 The NJ Division of Fish & Wildlife will monitor this species of salamander throughout the reach sampled for this project to see if numbers increase and to see if the restored bank is now good habitat for them as the exposed banks had not been previously.